This mod adds over 230 new amulets (and a few rings) to Skyrim and gives these amulets to some named NPCs. Most of the amulets are placed at several locations and some amulets are sold by an Amulet merchant who is in the Ragged Flagon.
Note From Tarsh: I have copied over the Nexus information into mobile format for easy reading. Please click the link below and let the mod author know how much you appreciate their work. 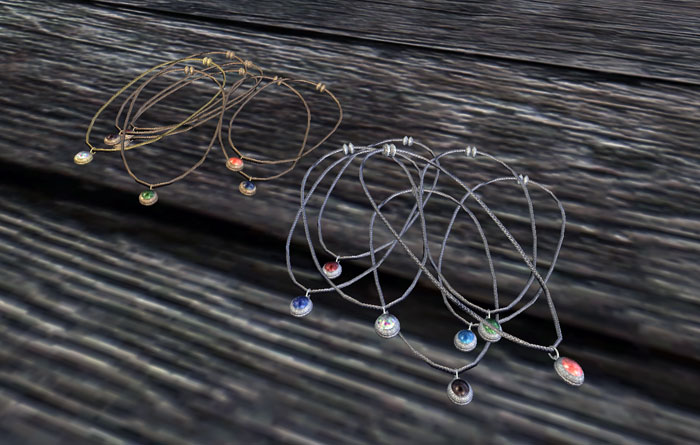 ::Compatibility::
– This mod doesn't change any quests, NPC's data, or Vendor's chest, and seems to be compatible with most other mods.
– Load Order should be into Interior Edits above Lighting Mods

::Credits::
Rings of Dragon Priest for the base game by testiger2
Thank you very much for the special rings!
Original Mod on Nexus


+ Dragon Priest masks can be converted to jewelry, after the player has obtained them, at the tanning rack.

+ Birthsign Amulets are bought in Riften

+ You can obtain left and right handed rings as you progress through the main quest. The Graybeards have a ring at Jurgen Windcaller's coffin and after defeating Alduin another two rings will appear in the High Hrothgar courtyard (where you were taught the clear skies shout)

This is the mod for amulets, but this mod has a few rings.

You can craft left-handed rings from right-handed rings at a tanning rack. If you enchanted a Dragonborn ring or rRng of the Voice, the enchantment will be lost at crafting the other hand ring. Gold ring, Silver ring and Thalmor ring:

Buy the left-handed rings from the Amulet Trader in the Ragged Flagon or Madesi in Riften. Those rings' left-handed version can't be crafted.

*After the player has been named Thane by their respective Jarl, the amulet reward will be handed to them without prompt. The only exception is the Rift by which a courier will greet the player.

*If the player has already become Thane before installing this mod, the courier will deliver the amulets.

*Jarl amulet and spare Thane amulet are in the jarl's bedroom. Guard amulet is in each barrack.

*The 9 hold gold amulet and silver amulet can be crafted after the player becomes Thane of each hold. Silver ingots or gold ingots are required for the recipe to appear in the menu.

*Fralia Gray-Mane in Whiterun and the amulets trader in the Ragged Flagon sell small necklaces.

:: Amulets for soldiers and officers ::

*Imperial or Stormcloak soldier's amulet will be given to the player when other soldier armors are given from the blacksmith in Solitude or from Galmar.

*Imperial or Stormcloak silver amulet can be crafted after the quest “Battle for Whiterun”. Silver ingots are required for the recipe to appear in the menu.

*The necklace “Hero of Skyrim” will be delivered by the courier after the Civil War.

*Thalmor soldier amulet and ring are somewhere in Thalmor Embassy and Northwatch keep. 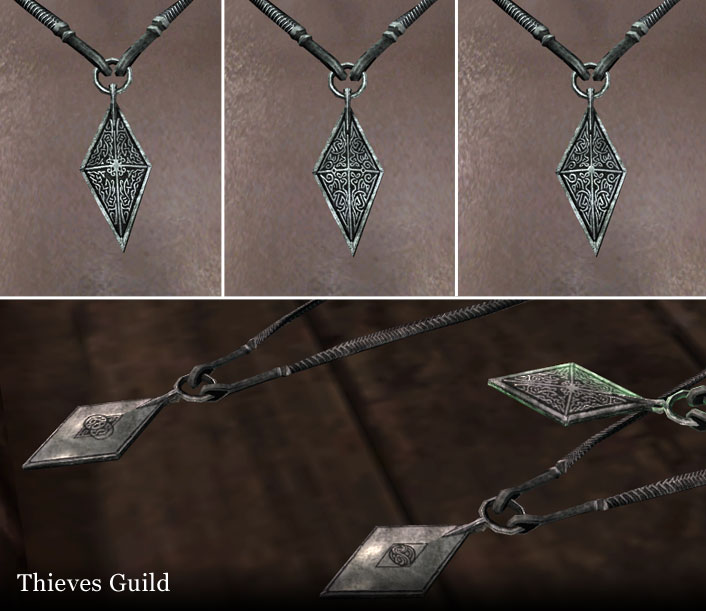 “Harbinger's Amulet” will be found together with Kodlak's journal during or after the quest “Glory of the Dead”.

“Archmage's Amulet” is in the Arch-Mage's quarters.

“Guild Master's Necklace” is in Mercer Frey's house or will be taken from Mercer's body.

“Listener's Amulet” is in your bedroom of Dawnstar Sanctuary.

*Harbinger's Amulet: During your blocking with Shield of Ysgramor, the Shield-Siblings near to you increase Magic Resistance by 20%. Blocking with Wuuthrad reduces elves' melee weapon damage by 20%.

*Nightingale Amulet: Crouching stops combat for a moment and forces distant opponents to search for a target (it's similar to Shadow Warrior).


The non-enchanted leader's amulet can be crafted after each primary quest line completed. Silver ingots, gold ingots or steel ingots are required for the recipe to appear in the menu. The amulet recipe of Dark brotherhood requires human's skulls. 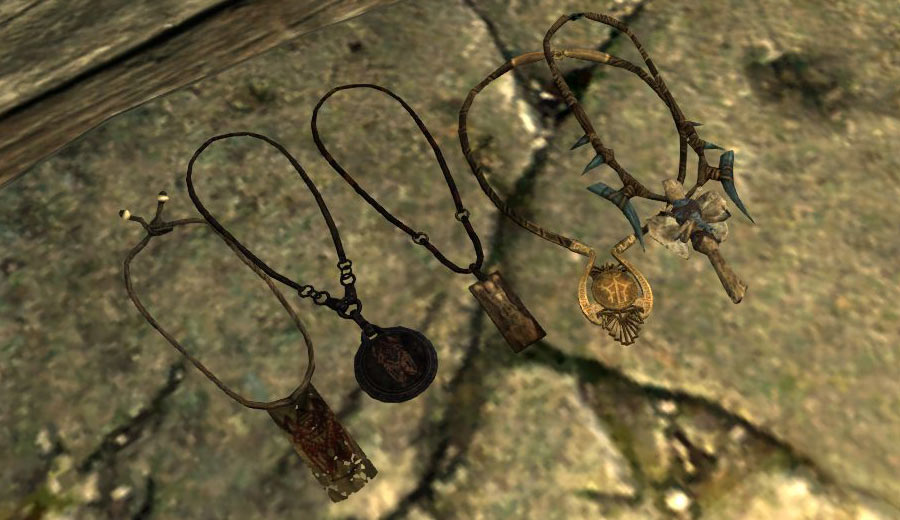 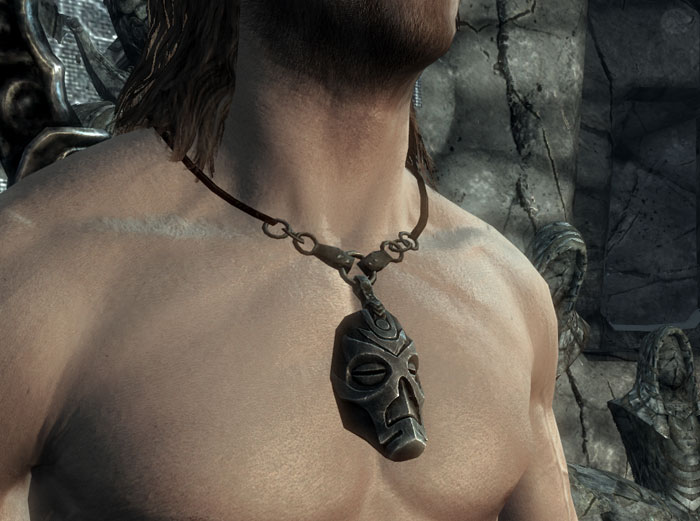 4 amulets for the Black Books:

Each amulet is in the same room with the Black Book. Near the chest in Kolbjorn Barrow, In the empty brazier at the right of the word wall in White Ridge Barrow. On the small book desk in Benkongerike Great Hall. On the enchant table in Raven Rock Mine.
Other Dragonborn DLC Amulets

Amulets of faith for Dunmer:

Sadri's Used Wares (Windhelm) and Brand-Shei (Riften) sells 4 variety amulets at random. The number of amulets isn't showed properly (showed twice the number), but it is not so troublesome.

After removing pre-enchantments, it is possible to enchant burned amulets at an arcane enchanter.


 List of amulets from which you can burn off pre-enchantments